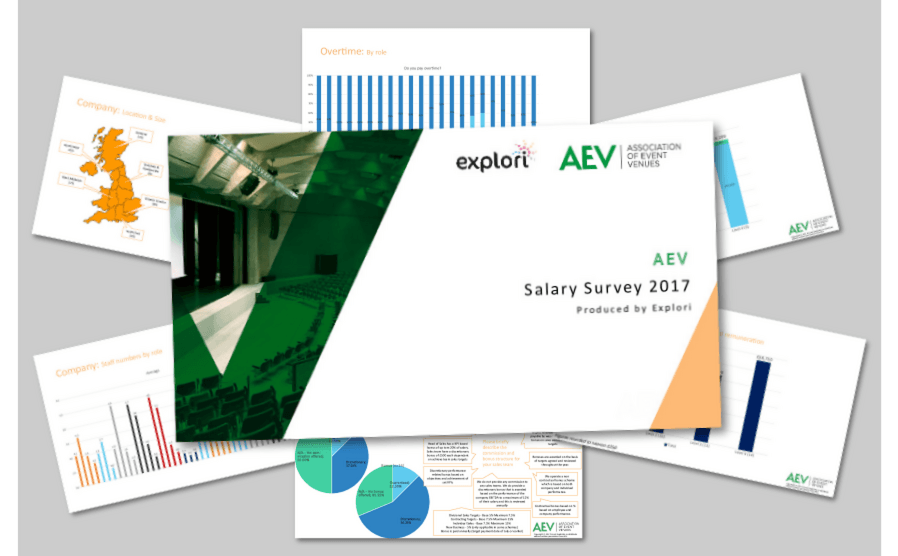 The Association of Event Venues (AEV) has announced the publication of its annual salary survey, produced by survey specialists Explori from data submitted by AEV member venues in the UK.

The 2017 Salary Survey, which is distributed only to participating member venues, enjoyed a 20% increase in participation, with venues providing extensive information about remuneration for a wide variety of roles, including sales, marketing, event managers and technical and operational functions, all sampled across 3 and 4 levels of seniority. Responses were collected using specially designed online forms by Explori between April and June 2017.

The AEV 2017 Salary Survey features an increased level of detail, particularly on holiday and pensions which have now been given their own sections in the report. The survey now also compares mean and median total remuneration and tracks a number of other indicators such as salary, commissions, bonuses, benefits and cars.

Rachel Parker, AEV director welcomed the publication of the survey results, saying “This survey was carefully designed to understand the earnings and benefits of various roles in the event venues sector. We retained Explori for a second year on the strength of its work on the AEV 2016 Salary Survey, both in terms of the level of detail and the improved response rates, and our confidence has been rewarded with the most comprehensive salary survey to date plus a jump in participation."

Parker continued, "This annual salary survey is steadily developing into a valuable tool to identify meaningful salary benchmarks for the sector and assist in the analysis of industry trends. With every new participating member venue, the report gains greater veracity and credibility.”