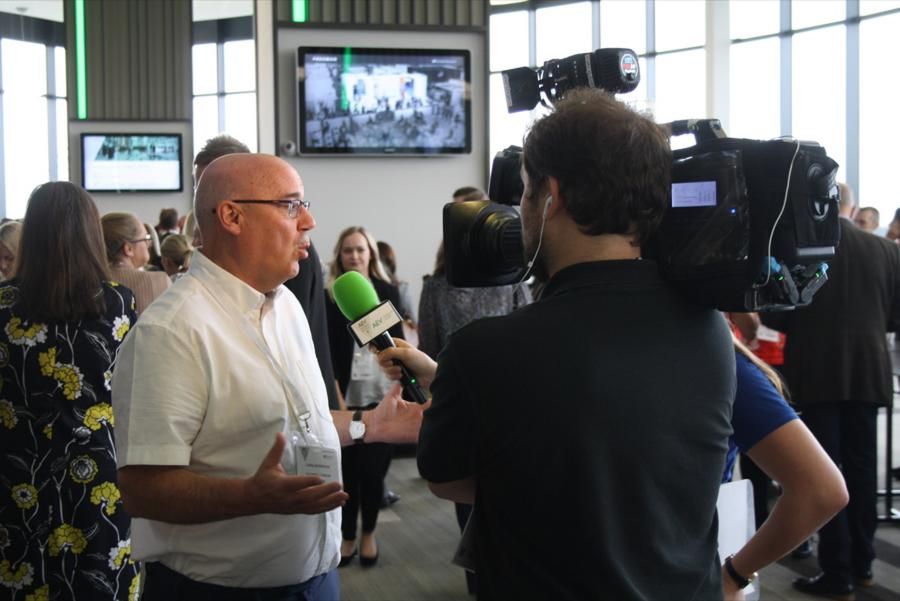 The Association of Event Venues (AEV) has brought its second annual conference to a successful conclusion, with over 150 delegates attending The Vox, Birmingham, on June 29, 2017, for a day of industry leading speakers and discussion panels.

The conference was preceded for the first time by an icebreaker event the day before, held at the NEC and Birmingham Resort World. Approximately 75 delegates attended the icebreaker, arriving at NEC the preceding afternoon and welcomed by conference chair Kathryn James, NEC’s managing director group conventions & exhibitions. Delegates then enjoyed refreshments and a finger buffet before being given a tour of the NEC’s latest long stay exhibit “Dinosaurs in the Wild”, featuring a virtual reality safari in the cretaceous era. The Icebreaker event concluded with a capacity crowd of delegates enjoying informal networking and drinks at the Sky Bar, Birmingham Resort World.

The conference proper began with registration and a welcome and introduction from the chair before the keynote address from Ascential’s Stuart Johnson, who spoke compellingly on event partnerships, data analytics and taking an organiser’s view. There followed a broad range of sessions covering topics from catering and counter-terror to technology led by experts and industry leaders including Paul Kehoe, chief executive, Birmingham Airport, Paul May, chairman of Trivandi and Murray Dickson , Head of Business Engagement, Group IT - NEC Group.

Although there were delegates from more than 20 UK and European venues, including Hamburg Messe, NEC, ExCeL, SEC and the O2, there were also many delegates from other organisations including event organisers and AV suppliers, contributing to the breadth of opinion voiced during the discussion panels and Q&A sessions.

Jeremy Rees, executive director ExCeL and AEV chair was clear on why he though the conference had appealed to delegates, saying “There’s really something of interest and utility for every delegate. The conference assembled a programme of compelling content oriented around creating world-class events, and as many speakers made clear, that’s a goal that requires partnership and collaboration as much as expertise and vision. The response from delegates has been simply outstanding, demonstrating that we have succeeded in creating a conference with something for everyone.”

Rachel Parker, AEV director, was quick to thank all the delegates and AEV’s partners for the conference, saying, “Last year’s conference was so successful, improving on it was a real challenge, but I think the ice-breaker event the day before conference played a huge part in building rapport and encouraging delegate contributions and engagement. I want to thank The Vox for its hospitality and our conference sponsors, Freeman EMEA and Ungerboeck Software, for their invaluable help and support. I’m especially grateful to the 150 delegates who made time in their jammed diaries for this event, and the exceptional speakers and panel session chairs who provided such a rich vein of relevant, useful and inspiring content.”